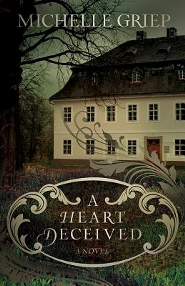 Miri Brayden teeters on a razor’s edge between placating and enraging her brother, whom she depends upon for support. Yet if his anger is unleashed, so is his madness. Miri must keep his descent into lunacy a secret, or he’ll be committed to an asylum-and she’ll be sent to the poorhouse.

Ethan Goodwin has been on the run all of his life-from family, from the law … from God. After a heart-changing encounter with the gritty Reverend John Newton, Ethan would like nothing more than to become a man of integrity-an impossible feat for an opium addict charged with murder.

When Ethan shows up on Miri’s doorstep, her balancing act falls to pieces. Both Ethan and Miri are caught in a web of lies and deceit-fallacies that land Ethan in prison and Miri in the asylum with her brother. Only the truth will set them free.

Welcome to England in 1795. King George III has already suffered from an episode of mental illness, but the Regency era has not yet begun. The king, once he was declared permanently insane, was able to live out his life in seclusion at Windsor Castle, but ordinary Englishmen and women weren’t so fortunate. The mentally ill, whether merely depressed or severely deranged, were harshly treated. They were sent to the nearest insane asylum, from which they seldom returned. Conditions were deplorable, as were the treatments the patients received. The Bethlem Royal Hospital, better known as Bedlam, was one of the most notorious asylums during this time.

It’s no wonder, therefore, that Miri wants to keep her brother Roland from there. The former headmaster contracted brain fever and was sent to recuperate in the home of a Bedfordshire vicar. But the vicar has gone missing, and Roland is abusive toward his sister both physically and mentally. Today, Miri could have left him and sought assistance, but not in 1795. Ethan’s arrival brings light to her life but just when happiness seems within reach, forces conspire to bring heartbreak and despair to all. What follows are extensive descriptions of life in an asylum and at Newgate Prison in London.

A Heart Deceived is a good though often brutal novel. There are several scenes of violence, and the descriptions of life in the London slums, the asylum and the prison aren’t exactly pleasant. But there are expressions of faith, and the inclusion of John Newton shows that there is always hope that a person’s heart can change. I did, however, have unanswered questions and I felt that some events were a little convenient or easily resolved.

Thank you to David C Cook for my free electronic copy of A Heart Deceived, which I downloaded from NetGalley. No review was required.