Overcoming these odds will take more than a miracle drug—it will take a miracle.

The infection wasn’t supposed to happen, but it did. The treatment was supposed to take care of it, but it didn’t. Then Dr. Josh Pearson discovers why—his patients, including the former President of the United States, have been dosed with a different strain of the original virus, one that is universally fatal. The only chance for survival is treatment with an experimental drug, but the manufacturer might already have discarded its supply.

As if treating the President of the United States isn’t stressful enough, the situation goes from bad to worse when Rachel Moore, a nurse Josh is falling in love with, falls ill. With the nation’s eyes on him, Josh must pull off a miracle to save a man who holds a good deal of power and the woman who holds his heart.

Josh Pearson found himself named as personal physician to former president David Madison after his predecessor died of an apparent heart attack. Madison and Pearson’s girlfriend, Rachel Moore, had been in South America as part of a goodwill trip but now both showed signs of respiratory illness. Initial tests suggested diphtheria but both supposedly had been immunized against it by Pearson’s predecessor shortly before the trip. If it wasn’t diphtheria, then what was it and could it be cured? 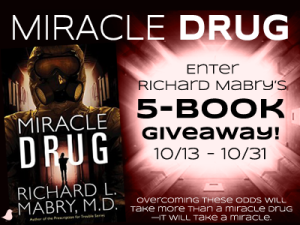 Although Richard Mabry has written several suspense novels, this is the first time I’ve actually read one by him. I didn’t know what to expect, but what I got was a fast paced plot with only moments of respite. Even after the medical emergency is resolved the high tempo continues. This is now a full blown criminal suspense. There’s blackmail and murder. No one appears to be safe, including the former president’s doctor. In the middle of it all, Pearson is trying to develop his relationship with his girlfriend.

Like Josh, I thought I had everything figured out. I thought I knew who was innocent and who was guilty. I was wrong, and I’m happy to admit that. It means the writing was good enough to throw me off. It also means I might not be that great a judge of character! Overall, it’s a book I enjoyed reading even though at times I wanted to jump to the end to see how it turned out.

Thank you to Litfuse Publicity Group and Abingdon Press for my complimentary copy of Miracle Drug, which I received in exchange for my honest review.

Have you read Miracle Drug? Do you plan to read it? Let me know your thoughts.