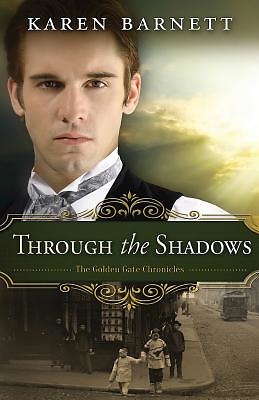 As San Francisco rises from the ashes, an age-old battle looms between corruption and the promise of new beginnings.

The devastating earthquake is just two years past, but the city of San Francisco is still trying to recover. Destruction of this magnitude is not so easy to overcome-and neither are the past regrets shadowing Elizabeth King’s hopeful future.

Hoping to right her wrongs, Elizabeth dedicates herself to helping girls rescued from slavery in Chinatown brothels, even if it means putting her own life at risk to sneak through the gloomy alleys and rooftops where dangers lurk.

Putting her life on the line for a worthy cause is admirable. But opening her heart is even more terrifying. So when Elizabeth meets attorney, Charles McKinley—a man who dreams of reforming San Francisco’s crooked politics—Elizabeth begins to doubt: Can she maintain her pretense and hide her past? Or will her secret jeopardize both their futures?

Through the Shadows is the third in the Golden Gate Chronicles, which follow a family and their friends through the 1906 San Francisco earthquake and its aftermath. People are flocking to the city looking for opportunity, even as corrupt officials and well-connected businessmen want to remove those they see as undesirable. Enter Charles McKinley, whose wealthy uncle attorney prefers to represent in court those who can afford to pay well or provide the right social connections. Providing legal assistance to a city mission is not among the senior McKinley’s ambitious plans for his nephew. Nevertheless, Charles is drawn to the mission’s cause.

As with Karen Barnett’s previous titles, Through the Shadows is an entertaining read of life after the earthquake. Readers get an insight into the good, the bad, and the downright ugly of San Francisco in the early 20th century. Morality appears to have a sliding scale, with certain behaviors and people given a ‘free pass’ while others are treated with shame. All sides of society are featured, from wealthy politicians to young Chinese girls rescued from slavery. The story of the King family runs throughout the series, with each book building upon the previous one. For that reason, I do recommend reading them in consecutive order. This is a series I’ve enjoyed, and I feel a little sad now that it’s come to an end. I’ll miss the characters and will wonder how their lives could’ve progressed. Hopefully, everyone lived “happily ever after.”

Thank you to Litfuse Publicity and Abingdon Press for my complimentary copy of Through the Shadows, which I received in exchange for my honest review.

This review is part of a Litfuse Publicity blog tour

Have you read Through the Shadows? Do you plan to read it? Let me know your thoughts.