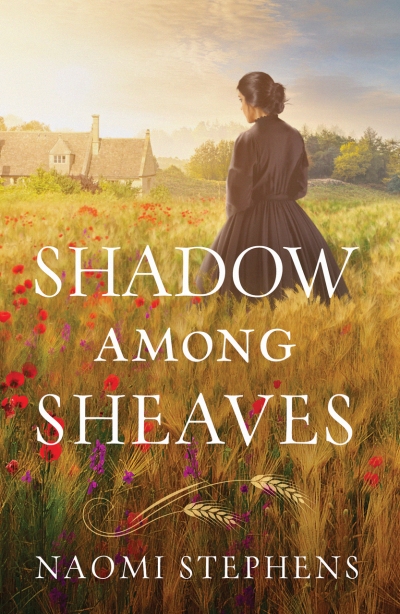 A Timeless, Beautiful Allegory of the Biblical Love Story of Ruth and Boaz

The Great Rebellion of 1857 was a remarkably bloody business. At a time when Britain’s imperial influence in India was sparking brutal clashes on both sides, no one could have expected Rena, an Indian woman, to marry a British officer—nor do they understand her decision to follow her mother-in-law to England after her husband’s tragic death.

Once the two widows are in Abbotsville, the stern yet compassionate Lord Barric attempts to help them despite his better judgment. Soon he is torn between the demands of reputation and his increasing desire to capture Rena’s heart for his own.

Thank you to the publisher for my complimentary electronic Advance Reader Copy of Shadow among Sheaves.

I’m always looking for new Bible-based fiction to read. I was drawn to this debut title because of its setting.

Placing a well-known story from the Bible is always a complicated task. On the one hand, you want to portray the tale in a different setting. On another hand, you want to stay true to the narrative. Sometimes, an author will need to decide between setting and truth. In Shadow among Sheaves, Naomi Stephens appears to have angled more toward the setting.

Rena is as much of an outsider to her mother-in-law’s community as the original Ruth was to Naomi’s home. But whereas Naomi was bitter over her circumstances, Nell endures much without comment. We also don’t know if Ruth was badly treated by the residents of Bethlehem, but Rena is abused by the townsfolk of Abbottsville (which sounds more like a North American or French location rather than an English one). In context, it’s understandable why the villagers are so prejudiced against someone of Rena’s background: the Indian Mutiny which killed so many British military and civilians takes place just four years prior to the year in which this novel is set. With the massacre so fresh in everyone’s mind, it’s possible they expect Rena to behave in a similar, murderous, fashion as her fellow countrymen.

It’s when I came to the scene comparable to Ruth approaching Boaz on the threshing floor that I began to cringe. That Naomi sent Ruth into a possibly compromising situation doesn’t bother us when we read it, but put it into a Victorian context and I started to rethink the Biblical passage. Lord Barric asked Rena if she would sacrifice herself for her mother-in-law, and I found myself agreeing with him. What Nell asked of Rena was horrifying. My mind went to the stories I’ve heard of parents trafficking their children, and I found myself asking if that’s what Naomi had done. I was now questioning elements of the Bible, and traveling into dangerous territory. I don’t know if I can undo those thoughts.

So, what’s the solution? I don’t know. There’s also an interpretation of The Beatitudes in the book with which I disagreed though, thankfully, I was able to dismiss that and continue to find favor with the majority understanding.  Basically, Shadow among Sheaves – if you strip away the Biblical comparisons and inspiration – is a good story. It’s a Victorian novel that mixes Frances Hodgson Burnett and Charles Dickens, and there are some nice descriptions of village festivities. Even the prejudice was believable, and can be considered relevant for our current times. Perhaps I need to read another story of Ruth, in the original context, to scrub the trafficking thoughts out of my head. Anyone got any suggestions for me?

Have you read Shadow among Sheaves? Do you plan to read it? Let me know your thoughts.

3 thoughts on “Shadow among Sheaves, by Naomi Stephens”