After the War Between the States, a Confederate officer longs to heal the heart of a beautiful woman—but first he’ll have to right the wrongs that were done to her.

Major Ethan Kelly has never been able to absolve himself of the guilt he feels for raiding a woman’s home shortly before he was taken prisoner during the Civil War. He is struggling to get through each day until he once again crosses paths with Lizbeth Barclay—the very woman he is trying to forget.

Life after the war is not much different for former Captain Devin Monroe until he meets Julianne VanFleet. He knows she is the woman he’s been waiting for, but he struggles to come to terms with the sacrifices she made to survive the war.

When Ethan and Devin discover that their former colonel, Adam Bushnell, is responsible for both Lizbeth’s and Julianne’s pain, they call on their former fellow soldiers to hunt him down. As the men band together to earn the trust of the women they love, Lizbeth and Julianne seek the justice they deserve in a country longing to heal.

I’ve read the previous two books about this group of Civil War veterans, so why not finish the series?

The final installment of the Lone Star Heroes series begins somewhat confusingly. We’re told that the prologue is set at the Johnson’s Island POW camp in Ohio in 1865, but the events that unfold in it are clearly set in a different place and time. The reason for the discrepancy is eventually made clear, but not before I’d re-read a couple of pages thinking I’d missed something.

The focus of Love Held Captive is how the war changed people. Sometimes they changed for the better, but not always. The former prisoners have been altered by their time on the battlefield and in the prison camp; now they’re trying to find where they fit in this post-war America. When we think of war we tend to think mostly of the men who fought in them, but Lizbeth and Julianne’s brutal experiences remind us that people at home suffered as well. Parts of this book aren’t pretty and veer on the disturbing side as well. I didn’t like the proposed plan the men formed to deal with Bushnell, and I hoped there would be a change of heart before the end. I could understand why they thought they had to do what they did, but I couldn’t agree with it.

If the book had ended with the culmination of their plan I’d have to give low marks to Love Held Captive. Thankfully, the concluding pages redeem it. The actual end takes the reader back to 1865 and the end of the war. The men are questioning why they had to endure such nightmare experiences, much as many of us question why bad things happen. One of them realizes that they, like us, will have to rest in the knowledge that we’ll get all our answers in heaven.

Thank you to Zondervan for my complimentary electronic copy of Love Held Captive, which I downloaded for my honest review.

Have you read Love Held Captive? Do you plan to read it? Let me know your thoughts.

Set against the real history of Nashville’s Belle Meade Plantation and the original Fisk University Jubilee Singers ensemble, To Wager Her Heart is a stirring love story about seeking justice and restoring honor at a time in American history when both were tenuous and hard-won.

With fates bound by a shared tragedy, a reformed gambler from the Colorado Territory and a Southern Belle bent on breaking free from society’s expectations must work together to achieve their dreams—provided the truth doesn’t tear them apart first.

Sylas Rutledge, new owner of the Northeast Line Railroad, invests everything he has into this new venture, partly for the sake of the challenge. But mostly to clear his father’s name. One man holds the key to Sy’s success—General William Giles Harding of Nashville’s Belle Meade Plantation. But Harding is champagne and thoroughbreds, and Sy Rutledge is beer and bullocks.

Sy needs someone to help him maneuver through Nashville’s society, and when he meets Alexandra Jamison, he quickly decides he’s found his tutor. But he soon discovers that the very train accident his father is blamed for causing is what killed Alexandra’s fiancé and shattered her world.

Spurning an arranged marriage by her father, Alexandra instead pursues her passion for teaching at Fisk University, the first freedmen’s university in the United States. But family—and Nashville society—do not approve, and she soon finds herself cast out from both.

Through connections with the Harding family, Alexandra and Sy become unlikely allies. And despite first impressions, Alexandra gradually finds herself coming to respect and even care for this man. But how can she, when her heart is still spoken for?

Sy is willing to risk everything to win over the woman he loves. What he doesn’t count on is having to wager her heart to do it.

I love historical novels that mix fiction with real people and events. I haven’t read the complete Belle Meade series, but I received this book from the Fiction Guild based on my set preferences.

It’s 1871. The Civil War is over and Nashville is slowly rebuilding. Railroads are becoming big business and competition is fierce. It is into this environment that Tamera Alexander has written a wonderful story that tugs at the heartstrings. Here is a tale of wealthy plantation owners and former slaves, and of new ideas and old ways that refuse to die. Alexandra initially meets Sy through her lawyer father, but their paths keep crossing and the inevitable (for this is an historical romance novel) soon happens.

This is a story where fiction meets fact. General Harding was a known Confederate who had a railroad line brought out to his plantation. Fisk University was founded in 1866 and housed in former military barracks, and they did have a group of singers who embarked on a tour to raise funds for the school. One of the more well-known singers, Ella Sheppard, becomes Alexandra’s room-mate in the book. Alexandra does take a few liberties in her writing: the Ashtabula River Railroad Disaster mentioned in the book (which has a local connection to where I live in New York) actually took place in 1876, which means she cuts short the life of one famous person featured by some five years. What struck me most about the novel was the racism the singers endured on their tour. While we might expect problems to arise in the south, one scene describes how a hotel in Ohio refused to honor their reservation. It wasn’t the only one to do so and more than one night was passed on a railroad station platform.

To Wager Her Heart is a book that held my attention from start to finish. I loved the simple faith that many of the characters had, “Give me Jesus,” which came from one of the songs the choir sang. Give me Jesus and everything will be all right for He’s all I need.

Thank you to Zondervan and Fiction Guild for my complimentary copy of To Wager Her Heart, which I received in exchange for my honest review.

Have you read To Wager Her Heart? Do you plan to read it? Let me know your thoughts. 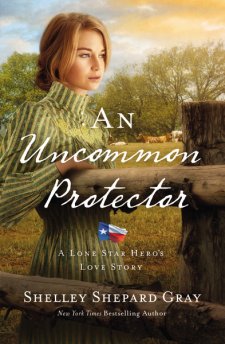 Overwhelmed by the responsibilities of running a ranch on her own, Laurel Tracey decides to hire a convict—a man who’s just scary enough to take care of squatters and just desperate enough to agree to a one year post.

The years following the war have been hard on Laurel Tracey. Both her brother and her father died in battle, and her mother passed away shortly after receiving word of their demise. Laurel has been trying to run her two hundred acre ranch as best she can.

When she discovers that squatters have settled in her north pasture and have no intention of leaving, Laurel decides to use the last of her money to free a prisoner from the local jail. If she agrees to offer him room and board for one year, he will have to work for her to pay off his debt.

Former soldier Thomas Baker knows he’s in trouble when he finds himself jailed because he couldn’t pay a few fines. Laurel’s offer might be his only ticket out. Though she’s everything he ever dreamed of in a woman—sweet and tender-hearted, yet strong—he’s determined to remain detached, work hard on her behalf, and count the days until he’s free again.

This is the second of the Lone Star Hero Love Stories series by Shelley Shepard Gray. Since I didn’t immediately recognize Thomas Baker’s name, I wondered if any of the characters from The Loyal Heart would feature in it.

Laurel Tracey is in a bind. She’s inherited her father’s ranch, but there’s no one to assist her other than her obnoxious step-siblings. They’ve long squandered their own inheritance and now want what doesn’t legally belong to them. Her persistent neighbor doesn’t believe she can manage the land, but hasn’t taken well her rejection of his courtship. So, she takes a leap of faith and hires Thomas who is determined to discover who’s threatening her. And he happens to have friends who can help.

An Uncommon Protector takes place shortly after the events in The Loyal Heart, the first book in the Lone Star Hero Love Stories series. As with that book, this novel opens with a scene on Johnson’s Island during the Civil War. There are also frequent flashbacks to Thomas’s time at the POW camp. I found it an easy read and worked out the villain’s identity almost immediately, although I did have a backup suspect in case I was wrong! Although the heroes ride away in the sunset at the end, there are hints of possible stories to come in the series and it looks like we only have to wait until October to learn what those stories are.

Thank you to Zondervan, BookLook Bloggers, and the Fiction Guild for my complimentary copy of An Uncommon Protector, which I received in exchange for my honest review.

Have you read An Uncommon Protector? Do you plan to read it? Let me know your thoughts.