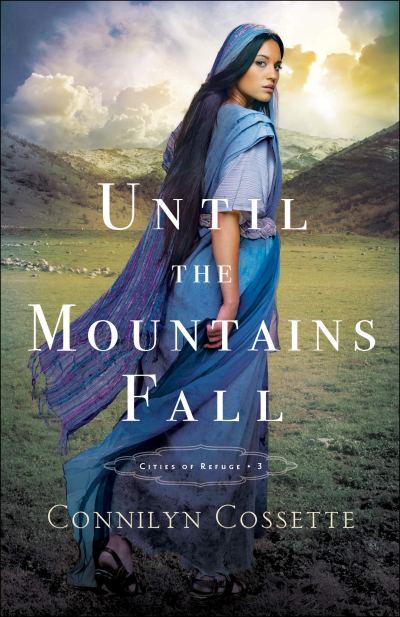 Recently widowed, Rivkah refuses to submit to the Torah law compelling her to marry her husband’s brother and instead flees Kedesh, hoping to use her talents as a scribe to support herself. Without the protection of her father, Kedesh’s head priest, and the safety of the city of refuge, Rivkah soon discovers that the cost of recklessness is her own freedom.

Malakhi has secretly loved Rivkah for years, but he never imagined his older brother’s death would mean wedding her. After her disappearance, he throws himself into the ongoing fight against the Canaanites instead of dwelling on all he has lost. But with war looming over Israel, Rivkah’s father comes to Malakhi with an impossible request.

As the enemies that Rivkah and Malakhi face from within and without Israel grow more threatening each day, is it too late for the restoration their wounded souls seek?

Thank you to Bethany House and the author for my complimentary copy of Until the Mountains Fall.

I’m grateful to have been selected for the launch team for Until the Mountains Fall, especially since I’ve read and enjoyed Connilyn’s previous books. Family matters prevented me from doing as much as I’d like for the team, but I’m happy to present my review.

How would you like to be married off to your husband’s nearest relative if he died? This type of union, called a Levirate marriage, is to be found in the Old Testament. Usually, the closest brother to the deceased man must step forward and this is the situation in the most recent novel by Connilyn Cossette. Malakhi is obligated to marry a woman he’s known since childhood, but Rivkah still sees him as the annoying boy who teased her when they were children.

Sometimes, you have to hit rock bottom and lose everything to appreciate what you had. I don’t think it’s a spoiler to say this is what happens to Rivkah, in more ways than one. We get Rivkah’s perspective throughout the book, and it gradually changes due to her situation. At first, I didn’t find her to be much of a sympathetic character. She had long refused to forgive Malakhi for his teasing, even though he apologized multiple times. Readers also get Malakhi’s perspective, and I found it easy to feel sorry for him.

This isn’t just the story of Rivkah and Malakhi. Their story is set against the backdrop of Israel’s gradual departure from Yahweh. The older generation remembers Moses, and Joshua is still alive. Yet the Hebrews haven’t obeyed all of His commands about the land He gave them. They’ve intermarried and begun worshipping idols. They give mere lip service to Him. We know He acted through Moses and also punished Moses for disobedience. Now, in Until the Mountains Fall, they are beginning to fall away even as Joshua advances in years.

This is not the end of the Cities of Refuge series. The final title, currently being edited, is Like Flames in the Night. It’s scheduled for publication in March 2020.

Have you read Until the Mountains Fall? Do you plan to read it? Let me know your thoughts.

Author Q and A

One thought on “Until the Mountains Fall, by Connilyn Cossette”